On Thursday, June 29th 2017 we enjoyed the last lecture in the INPUTS Forum series "Changing ecologies: language, culture and the environment". Tendai Mangena, member of our Postcolonial Literary and Cultural Studies team, gave a talk entitled "Traces of Antinomy between Culture and the Law in Gappah's short stories".

The lecture series proved to be a success. We were able to welcome some renowned international guests, including Evelyn Camille from Canada, Epifania Amoo-Adare from Ghana or Sune Vork Steffensen from Denmark. Next to Tendai's, we could also offer a lecture of another colleague in the Postcolonial Literary and Cultural Studies group, Oluseun Tanimomo. And we had the opportunity to establish and strengthen our connections with other German universities by welcoming Kylie Crane (Mainz) and Nico Nassenstein (Cologne).

The series was also successful in terms of content, as the lectures formed a coherent conversation, picking up similar themes but approaching them from different perspectives and using different methods and examples.

Registered users can see the mobile lectures from the series here. 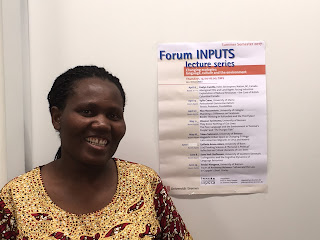 Tendai Mangena in front of the series poster