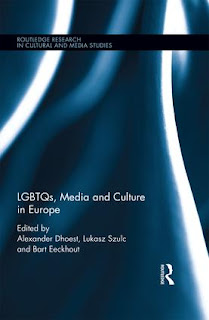 Including Joanna's chapter: "9. Contesting Hegemonic Gender and Sexuality Discourses on the Web: A Semiotic Analysis of Latvian and Polish LGBTQ and Feminist Blogs"

About the Book
Media matter, particularly to social minorities like lesbian, gay, bisexual, transgender and queer people. Rather than one homogenised idea of the ‘global gay’, what we find today is a range of historically and culturally specific expressions of gender and sexuality, which are reflected and explored across an ever increasing range of media outlets. This collection zooms in on a number of facets of this kaleidoscope, each chapter discussing the intersection of a particular European context and a particular medium with its affordances and limitations. While traditional mass media form the starting point of this book, the primary focus is on digital media such as blogs, social media and online dating sites. All contributions are based on recent, original empirical research, using a plethora of qualitative methods to offer a holistic view on the ways media matter to particular LGBTQ individuals and communities. Together the chapters cover the diversity of European countries and regions, of LGBTQ communities, and of the contemporary media ecology. Resisting the urge to extrapolate, they argue for specificity, contextualisation and a provincialized understanding of the connections between media, culture, gender and sexuality.

Review
"This collection addresses the Anglo-American bias in much LGBTQ media research and offers the reader a series of snapshots, both past and present, that detail how European LGBTQ people have used, and continue to engage with, media technologies, texts and practices. A must-read for anyone who is interested in work in this area." - Sharif Mowlabocus, University of Sussex