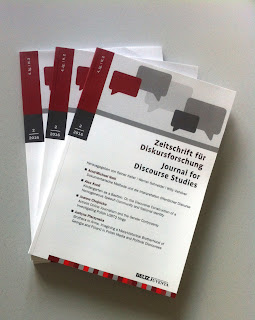 Abstract: This article investigates a corpus of blog entries dealing with gender issues published on selected Polish LGBTQ blogs. It focuses in particular on texts which could be considered examples of activist online journalism – a hybrid genre combining social activism and alternative journalism – interacting with, building upon, and re-appropriating mainstream frames and news reporting genre conventions. The article employs the framework of positive discourse analysis (PDA) and specifically a revised typology of counter-strategies developed by Felicitas Macgilchrist (2007), showing the use of strategies of non-ironic and ironic inversion, complexification, partial reframing and radical reframing to contest the ways the topic of gender is dealt with in mainstream media.

Abstract: The present article is concerned with the concept of stance and its relationship to face, face work and politeness applied to Latvian spoken discourse. It offers an extensive review of relevant literature on stance and politeness theories, followed by an illustrative analysis of politeness strategies and stance markers found in a radio interview. On this basis, the article argues that stance markers - epistemic, evidential, mirative and hedging devices - may be considered a negative politeness strategy, responding to the speaker’s and hearer’s desire for autonomy. In conclusion, it suggests a hypothesis that could explain differing use of stance markers and politeness strategies by speakers fulfilling varying conversational roles and of various social standing.
Labels: Language Studies, publications
Newer Post Older Post Home