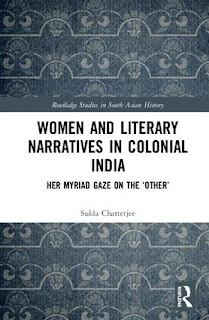 Women and Literary Narratives in Colonial India.
Her Myriad Gaze on the ‘Other’, 1st Edition
By Sukla Chatterjee
Routledge
138 pages

In the colonial context of South Asia, there is a glaring asymmetry in the written records of the interaction between the Bengali women and their European counterparts, which is indicative of the larger and the overall asymmetry of discursive power, including the flow and access to information between the colonizers and their subjects.
This book explores the idea of gazing through literature in Colonial India. Based on literary and historical analysis, it focuses on four different genres of literary writing where nineteenth-century Bengali women writers look back at the British colonizers. In the process, the European culture becomes a static point of reference, and the chapters in the book show the ideological, social, cultural, political, and deeper, emotional interactions between the colonized and the colonizer. The book also addresses the lack of sufficient primary sources authored by Bengali women on their European counterparts by anthologizing different available genres. Taking into account literary narratives from the colonized and the less represented side of the divide, such as a travelogue, fantasy fiction, missionary text and journal articles, the book represents the varying opinions and perspectives vis-à-vis the European women.
Using an interdisciplinary approach charting the fields of Indology, colonial studies, sociology, literature/literary historiography, South-Asian feminism, and cultural studies, this book makes an important contribution to the field of South Asian Studies, studies of empire, and to Indian women’s literary history.
Labels: Literary and Cultural Studies, publications
Newer Post Older Post Home