Invitation to two events in December

The Postcolonial Language Studies team would like to invite all interested colleagues and students to two events organized by Joanna Chojnicka in December 2017. They are both part of the series of events under the common title "Questioning the (in)visible: being critical in humanities and social sciences", for the planning and organization of which Joanna has received the ZF01 Impulse grant. 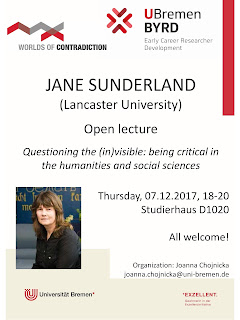 Abstract:
The critical, reflexive, on-going questioning, for example of taken-for-granted assumptions and invisible ideologies, along with exploration of what is not articulated, are arguably epistemological and ethical imperatives in the humanities and social sciences. Nevertheless, the importance of such questioning and exploration is sometimes overlooked. In this lecture I examine some of its relevant components, including the obligation to identify, address and explore contradictions. I focus on the need to look at textual, visual and multimodal absences, omissions, backgrounding and the completely invisible: what could be (more) present but is not, and what, from a certain ideological standpoint, should be. More concretely, I look first at the notion of diversity in foreign language education – what this welcome notion does and does not extend to in practice. Second, I look at the notion of heteronormativity in fiction for young children, the gap this leaves, and to what extent is being satisfactorily addressed.

BIO:
Jane Sunderland is currently an Honorary Reader at Lancaster University, where she was the Director of Studies of the PhD in Applied Linguistics by Thesis and Coursework programme in 2000-2012. Her research interests include gender, language and discourse; Harry Potter and children’s (especially boys‘) literacies; language and gender in African contexts; the representation of gender and sexuality in children’s picturebooks and in language textbooks; gender and sexuality in the language classroom. Jane’s most recent books are the research monographs Language, Gender and Children’s Fiction (2011, Continuum), Gendered Discourses (2004, Palgrave Macmillan), and the advanced coursebook Gender and Language: an Advanced Resourcebook (2006, Routledge). She is currently working on a monograph for Routledge entitled Harry Potter and Young Muggles’ Reading (with Steven Dempster and Joanne Thistlethwaite). She is also co-editor (with Lilian Atanga, Sibonile Ellece and Lia Litosseliti) of Gender and Language in Sub-Saharan Africa: Tradition, Struggle and Change (John Benjamins, 2013), co-editor (with Lia Litosseliti, Kate Harrington and Helen Sauntson) of Gender and Language Research Methodologies (Palgrave, 2008) and (with Lia Litosseliti) of Gender Identity and Discourse Analysis (John Benjamins, 2002). Jane has published articles in Visual Communication, Language and Literature, Journal of Pragmatics, Gender and Education, ELT Journal, System, Language Teaching Research, Discourse and Society, Language Teaching, Language and Education, Linguistics and Education and Gender and Language.

The organization of the lecture is supported by the Worlds of Contradiction (WoC).

Rolling in your academic career? Writing articles, enhancing your citation index, applying for and participating in conferences? Just wait for a second. Do you ask yourself why you are doing it and doing it this way?

Once you got fascinated by something (say gender inbalance) and decided to study it further at university. It was not always easy, but you've been learning new theories and methods, going on field trips, polishinhg your research questions and some 10 years later, here you are researching some really complicated problems (say gender and climate change in eco-cultural studies). But why? And why this way? Why is it important to know the answers to these questions?

We are all biased as researchers: by the life experience, by the context this experience is used in, by the educational curriculum, by the publishing tradition. We choose some methods in favour of others not necessarily because they are better for our research questions. The latter is also quite far from a free choice. The process of collecting data is biased by the context (situational, social, historical, you name it) and interpreting it is biased as well. You think you are on the safe side by choosing quantitative data and statistics? Guess what, no. Not at all. The best part of it you need to be reflexive and think critically to address soical problems and not stick in the Ivory tower of academia.

During this 4-hour workshop you will learn the frameworks of critical thinking and apply it to your own research. You will train on real reserach cases and receive the input from the interdisciplinary group.

You want to join to: