A new publication by Tendai Mangena 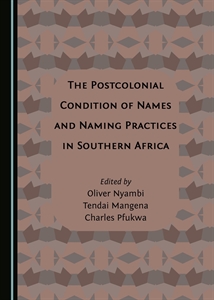 A book co-edited by Tendai Mangena has recently come out!

Book Description
The Postcolonial Condition of Names and Naming Practices in Southern Africa represents a milestone in southern African onomastic studies. The contributors here are all members of, and speakers of, the cultures and languages they write about, and, together, they speak with an authentic African voice on naming issues in the southern part of the African continent. The volume’s overarching thesis is that names are important yet often underestimated socio-politico-cultural sites on which some of the most significant events and processes in the post-colony can be read. The onomastic topics covered in the book range from the names of traditional healers and male aphrodisiacs to urban landscapes and street naming, from the interface between Chinese and African naming practices to the names of bands of musicians and mini-bus taxis. There is a strong section on literary onomastics which explores how names have been variously deployed by southern African fiction writers for certain semantic, aesthetic and ideological effects. The cultures and languages covered in this volume are equally wide-ranging, and, while some authors focus on single languages and cultures (for example Thembu, Xhosa, Shona), others look at inter-cultural influences such as the influence of the Portuguese and Chinese languages on Shona naming.